A loss-in-weight feeder can accurately meter powders, granules, and pellets in several industries, including foods, chemicals, pharmaceuticals, and plastics. But if the feeder hasn’t been installed correctly, mechanical problems can create slight upsets or artificial forces that disturb the weight readings and affect the feedrate. Part I of this two-part article explains how a loss-in-weight feeder operates, how to recognize symptoms of mechanical problems, and how to run feeder tests. Part II, which will appear in the January 1999 issue, discusses how to find and fix mechanical problems.

Even with the most advanced control algorithms and material handling components, a loss-in-weight (LIW) feeder can’t perform reliably if its weighing mechanism doesn’t function as intended. This problem typically stems from a poor feeder installation. [Author’s note:While this article concentrates on finding and fixing mechanical problems with continuous LIW feeders, many of the principles also apply to batching LIW feeders.]

By identifying and correcting mechanical problems with your LIW feeder’s weighing mechanism, you can achieve reliable weighing and improve feeding performance. Before discussing how to do this, let’s take a look at how the feeder works.

How a LIW feeder operates

While various types of LIW feeders are available, most function similarly.

Components. The typical LIW feeder, as shown in Figure 1, has an active or weighed, section that includes a material hopper (sometimes equipped with an agitator), discharge device (such as a screw feeder, belt feeder, or vibratory pan feeder), and motor and drive. The feeder also has an inactive, or nonweighed, section, including the frame, structural support, motor speed controller for the discharge device, and controller (typically remotely located and containing multiple displays for feedrate, motor speed, static weight, and other data). Together, a weighing mechanism (such as a load cell or digital weight-sensing device and its mounting hardware), wiring from the weighing mechanism to the controller, and wiring from the controller to the discharge device’s motor speed controller form a bridge between the feeder’s active and inactive sections.

(or worker) to refill the hopper. The controller ensures that material continues to feed the process while the hopper is refilling.

controller to either increase or decrease the loss in weight and, hence, the feedrate.

How weighing disturbances affect feeding. Isolating the LIW feeder from external influences prevents slight upsets to or artificial forces on the feeder’s weighing mechanism. This can help minimize physical disturbances and allow the controller to maintain feedrate control. The artificial fluctuation in the weight signal caused by such disturbances can be extremely harmful: Even though the 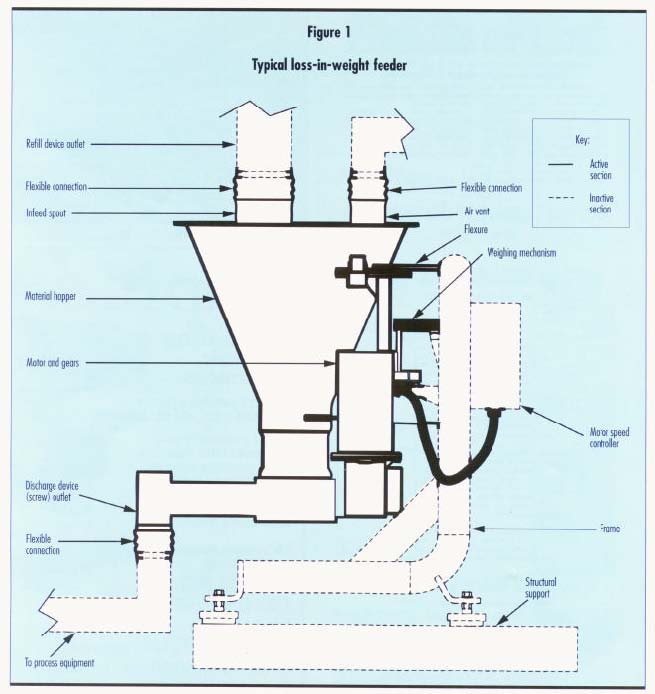 fluctuation produces a very small instantaneous weight change, in relation to the actual weight change desired, the effect on feedrate can be very large.

To illustrate the effect of even a small weight disturbance on the feeder’s feedrate, let’s consider a relatively long time between samples – 0.5 second for a feeder that has a target feedrate (setpoint) of 1 lb/min. (Almost all LIW feeder controllers can accurately detect a weight change in just a fraction of a second, although the time between weight samples varies from controller to controller because of their electronic and application differences.) In this case, the disturbance lasts 0.5 second and has a force of 0.2 pound. The feedrate (in pounds per minute) is calculated as force times 60 divided by duration. So:

How to recognize symptoms of mechanical problems

You can recognize mechanical problems that lead to poor LIW feeder performance by several symptoms:

How to run feeder tests

If your LIW feeder exhibits any of these symptoms, you can perform some simple tests to determine whether the feeder has been correctly installed and is operating without mechanical problems. (This

assumes that the feeder’s electronics – load cell or other weighing mechanism, controller, and motor speed controller – are accurate, reliable, and designed properly for your installation and that the controller is correctly set up and programmed for your installation. Routine calibration tests and more in-depth evaluations of your feeder can help you determine this.’)

Rely on your feeder manufacturer’s performance specifications to determine whether results of the following tests are acceptable or not. If the manufacturer gives no specifications for your unit’s performance, use historical data from the feeder or another similar feeder to determine the unit’s normal operational limits, The tests include weight stability, repeatability, and linearity.

If your LIW feeder exhibits any of these symptoms, you con perform some simple tests to determine whether the feeder has been correctly installed and is operating without mechanical problem’s.

Weight stability test. When the feeder’s discharge device and hopper agitation device (if so equipped) are stopped, the controller display’s weight reading shouldn’t fluctuate outside the specified limits. To verify this, ensure all equipment near the feeder being tested is operating. Then, with the discharge device stopped, record the highest and lowest weight readings on the display for a period specified by your feeder manufacturer (typically less than 1 minute). The weight reading fluctuations you record, minus the feeder’s specified stability, reveal the amount of fluctuation introduced by the surrounding equipment and plant structure. If the fluctuations are too large, the feeder installation may have one or more mechanical problems (as discussed in the section, “How to find and fix mechanical problems,” in Part II of this article). By turning off each surrounding piece of equipment one at a time and watching the weight reading for fluctuations, you can determine if one piece of equipment near the feeder is causing most of the fluctuations.

To perform the test, make sure all connections- for instance, from the refill device, downstream 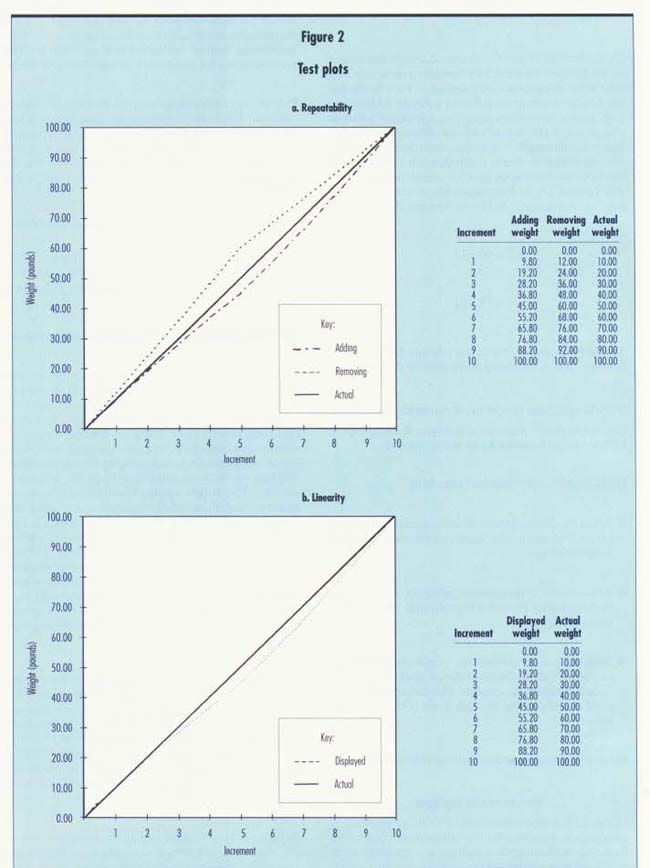